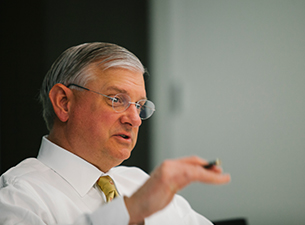 As Managing Principal of Capital Strategies, David directs the areas of Wealth Transfer and Executive Benefits for the firm. David has been a member of the firm for 20 years.

Prior to joining Capital Strategies in 1995, David built a successful business and tax planning practice as a founding partner of a prominent Birmingham law firm. He began his career as an associate attorney with the Birmingham office of Burr & Forman LLP.

Active in the M Financial Group community of member firms, he has served on the Member Firm Relationship Committee (MFRC) and chaired the 2014 Annual M Marketing Meeting. In 2016 David was elected to the Board of Directors for M Financial.

David belongs to the Birmingham Rotary Club, is a member of the United Way Toqueville society, serves on the Board of the National Christian Foundation (Alabama), and is a past Chairman of the Board for King’s Home. He is also active in Third Presbyterian Church as a Member of Session.

David worked to make education in Alabama better by serving for 16 years on the Alabama State Board of Education, the policy-making body for K-12 and Board of Trustees for the Community College System, often as presiding officer.

He and his wife, Karen, have three children, and in his off time he enjoys politics, reading, wing shooting, and college football.

David holds a B.A. in English and Political Science from the University of Alabama at Birmingham. He received a J.D. from the Cumberland School of Law at Samford University and obtained an LL.M. (Taxation) from New York University.